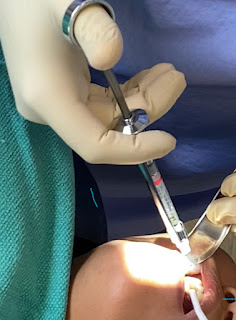 Local Anesthetic is a wonderful thing.  I can't imagine doing dentistry with out it.  Interesting to note that Lidocaine was first synthesized in l943 and used in minor dental surgery.  Now let's take a little deeper look into how local anesthetic works. I will try and simplify the process so that you can have a basic understanding you can remove a tooth or do gum surgery with out feeling any type of sharp pain.   First you have to understand how we can feel pain.  Pain is felt when a stimulus is initiated at the site of injury.  Let's use the example of your finger getting slammed by a car door when your little sister is not paying attention.  At the speed of light the nerve will conduct an impulse that will tract from the site of injury up to the brain where it will then communicate with all the other organs and tissues.  This will allow the body to protect itself from repeating the injury.  The network of nerves tracts throughout the whole body.  Now if you were to cut
Post a Comment
Read more 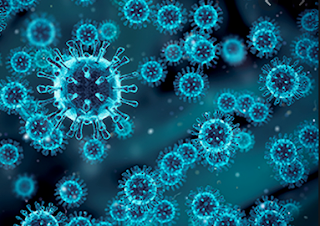 This COVID - 19 Pandemic has changed the world as know it.  It has changed the way we practice dentistry.  As a periodontal surgeon I have learned the importance of keeping a very clean practice.  This is especially true when performing any type of oral surgery.  In my practice before this Corona pandemic I would ensure that I use sterile technique in all of my surgeries.  I would make sure that my assistant and I are on the same page of sterile set up and they would see my frustration when sterile technique is not followed.   However adding the pandemic into the mix I am now looking into more and more ways of battling the microscopic enemy.  All patients now are required to go through several screenings for possible covid-19 infection.  We have each patient get their temperature read prior to going into the back clinic.  Everyone is also required to fill out a screening worksheet provided by the ADA in order to decrease the risk of a possible covid infection.  If the patient is able t
Post a Comment
Read more

December 23, 2020
My story of becoming a Periodontist started back in 1993.  I had graduated from Frankfurt American HS, Germany and accepted to Brigham Young University in Provo Utah.  I was not sure what I wanted to do as a life long career but was interested in the medical field.  I wasn't sure if I wanted to become a physician or what so I spent most of my free time going to the career center and looking up different professions.  I also remember studying in a nearby hospital with my friend and felt it would be cool to become a doctor one day.  While I was studying at BYU -Provo my family had moved from Germany to Seoul Korea and during my summer recess I was able to explore Korea.  My family ended up staying in Korea for about 6 years which I felt was a terrific experience.  If anyone has the opportunity to live in Korea I highly recommend it.  The culture and food is just amazing!  While I was there I learned a lot of Hangul (korean language), I earned a blackbelt in taekwondo, and earned quit
Post a Comment
Read more